John Hayes has been coaching baseball for more than 35 years. He had a very successful High School and College career. John led the nation in 1980 with the highest batting average for a Junior College player. Soon after, John was asked to return to his high school as an assistant coach, and then began assisting his college team with the development of its players in hitting and general baseball development. After a few years coaching at that level, John began working in the mining business and eventually became an owner in a local mining company. John soon realized he missed coaching baseball and started a competitive team that ultimately lead to his love for coaching youth baseball.

After leaving the mining business, John and his wife Tasha opened KC Baseball Academy in the fall of 2015 to provide a place for young players to develop and improve their baseball skills. John is dedicated to the highest level of baseball instruction, but also the individual development of each player to become good young men. KCBA provides the best opportunity for players to achieve their ultimate goal of playing at the highest levels, and has become highly respected for player development and educating players in all aspects of the game. 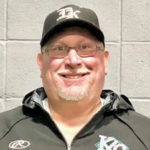 A left handed pitcher, Greg attended Shawnee Mission South High School and was a three year letterman. Senior year he was First Team All Metro, First Team All Sunflower League, First Team All State and The Johnson County Player of The Year. While in high school, Greg threw two no hitters and during his senior year he gave up only 4 earned runs and went 11-1 with an ERA of .081.  Greg still holds the record at SMSHS for the lowest ERA in a season at 0.081.  He earned a baseball scholarship to Kansas State University and Lettered from 1989 to 1992, helping the Wildcats reach their first ever Big 8 Tournament in 1990. Greg’s career ended with an elbow injury.  Greg started coaching youth baseball in 1999 and has coached at the showcase level since 2010. He has currently placed over 50 baseball players collegiately, including 8 from his 2019 squad.

Attended Blue Springs High School and Blue Springs South High School. Played Varsity as a Sophomore, Junior and Senior. All Conference and All District honors. Received full scholarship to attend Missouri Western State College and was All Conference Pitcher of The Year. Transferred to Missouri State on full scholarship for Senior year. He was then drafted by The Mariners Organization and played two years until a career ending injury. Jason has been coaching youth baseball since early 1990’s and has been coaching with KC Baseball Academy since 2017. 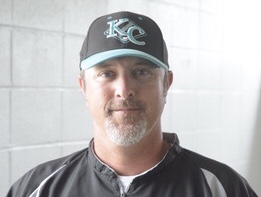